Why do so many people hate their photographs and what to do about it?

Would you like to know what’s the most common thing that my clients say to me before the start of the photo shoot?

Yes, that’s exactly right – “I hate having my photographs taken” or “I hate the way I look on photographs“.

So why is it, that with such incredible advances in technology, photographs are getting worse and worse and so many people hate them? I have asked my 13 -year old son Yuri to be my model for this blog post, so I can illustrate some common issues, and offer solutions to resolve them.

Lens distortion is one of the factors that makes people look really weird, to say the least. For those who are interested in the scientific definition of distortion, here is a good article about it. I won’t do into any technical details, as images say it much better than words. When the lens is close the the face, it appears to be bent inwards – see examples below. 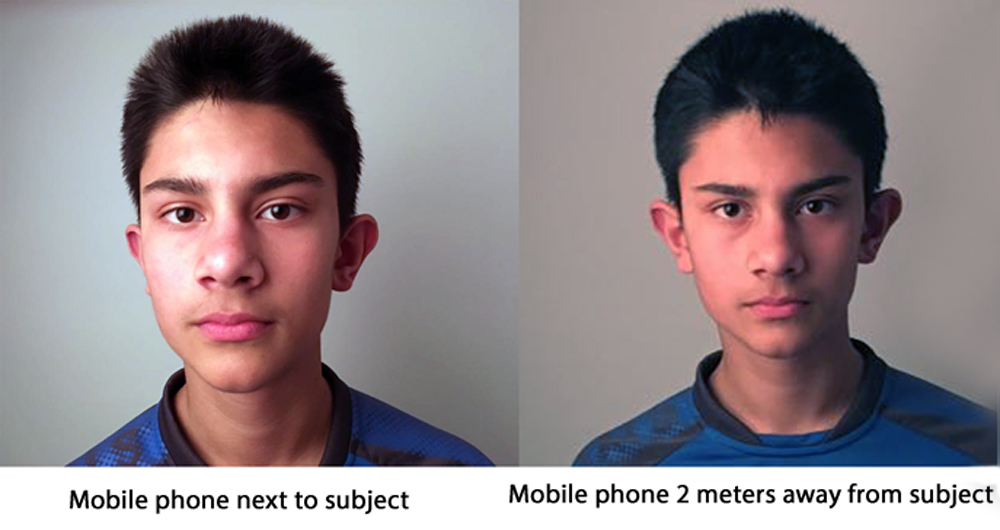 The above two photographs were taken in the studio with Yuri’s mobile phone, and as you can see the distortion is pretty bad there – the nose appears very big, and eyes and lips are also much bigger than in real life. In our culture of selfies, a lot of people see themselves through the lens of a mobile phone, and no wonder they don’t enjoy what they see.

What can be done about it? Always allow some distance between your face and the camera – the bigger the better… put your phone/camera or a timer and take a few steps back – you will look a lot better. See photo on the right – the same place and lighting, but face looks a lot more normal.

Distortion also happens in professional SLR cameras – it’s a lot less prominent, but it’s there! So the same solution applies – make sure you are not too close to the subject!

As you can see from the examples above, the pictures were taken in my studio, using the same studio lights, apart from the fact that my studio flash fired for the last photo.

With incorrect lighting, even very beautiful people will not look very good. The most unflattering light is on-camera/on phone flash. It makes people look like monsters – so no wonder so many people hate it.

Solution: Avoid flash lights, and use natural light whenever possible. If it’s very dark, using a torch on another phone. Positioning the light at 45 degrees to the subject, will produce much better results than on-camera/on-phone flash.

Often these days photographs are taken in a hurry, to capture that moment, and people don’t really have the time to relax and look natural… they either pose with the “selfie face”, or just put on a smile, which can often look a little fake – simply because very few people are able to smile naturally when there is a camera/phone pointed at them. No wonder so many people can’t stand looking at those photos, that portray the worst version of them.

Solution: if you’d like a nice portrait, take your time to do it. Take many more photos than just one – it does not cost extra, but you may see much better results by trying a bit harder.

And if you don’t have the patience to do any of the above, but do believe that you look much better that those mobile phone photos, please do get in touch and I’ll make sure you do look your very best!